In a recent artcle by WND titled “White House map ‘erases’ Jerusalem, biblical territories”, the artcle reveals that a recent video from the white house not only shows Israel in its pre 1967 war borders, it also states that the White House refuses to name Jerusalem as its capital.

If the world would look to the Bible, it clearly states what the borders are for the land promised to Abraham, again to his son Isacc, and once again to his grandson Jacob whos name was later changed to Israel. The following short artcle from GotQuestions.org gives a summary of these borders.

“What is the land that God promised to Israel?”

In regards to the land that God has promised Israel, Genesis 15:18 declares, “To your descendants [Abraham’s] I give his land, from the river of Egypt to the great river, the Euphrates.” God later confirms this promise to Abraham’s son Isaac, and Isaac’s son Jacob (whose name was later changed to Israel). When the Israelites were about to invade the Promised Land, God reiterated the land promise, as recorded in Joshua 1:4, “Your territory will extend from the desert to Lebanon, and from the great river, the Euphrates — all the Hittite country — to the Great Sea on the west.”

With Genesis 15:18 and Joshua 1:4 in mind, the land God gave to Israel included everything from the Nile river in Egypt to Lebanon (North to South)
and everything from the Mediterranean Sea to the Euphrates River (West to East). So, what land has God stated belongs to Israel? All of the land modern Israel currently possesses, plus all of the land of the Palestinians (the West Bank and Gaza), plus some of Egypt and Syria, plus all of Jordan, plus some of Saudi Arabia and Iraq. Israel currently possesses only a fraction of the land God has promised. 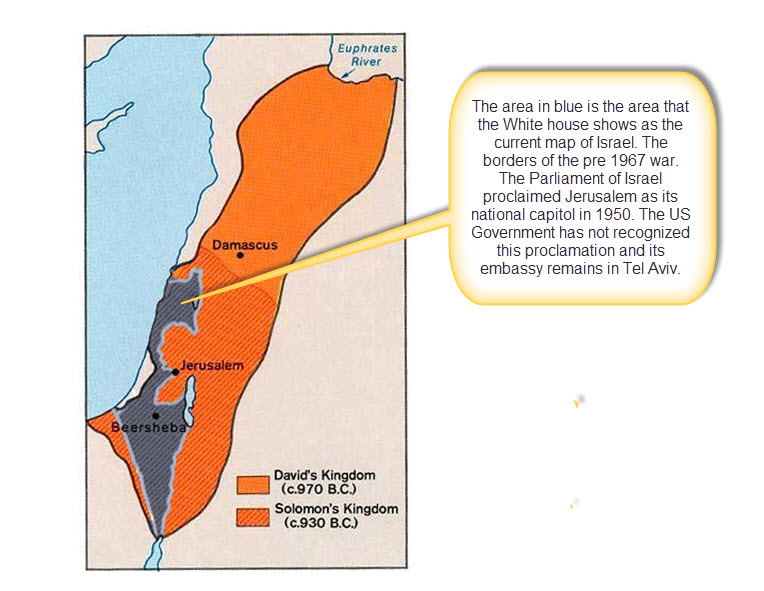 Why do Jews and Arabs / Muslims hate each other?
What are the twelve tribes of Israel?
Why did God choose Israel to be His chosen people?
What is Israelology?
Tagged Israel, Israel Biblical Border, Israel borders, white house. Bookmark the permalink.