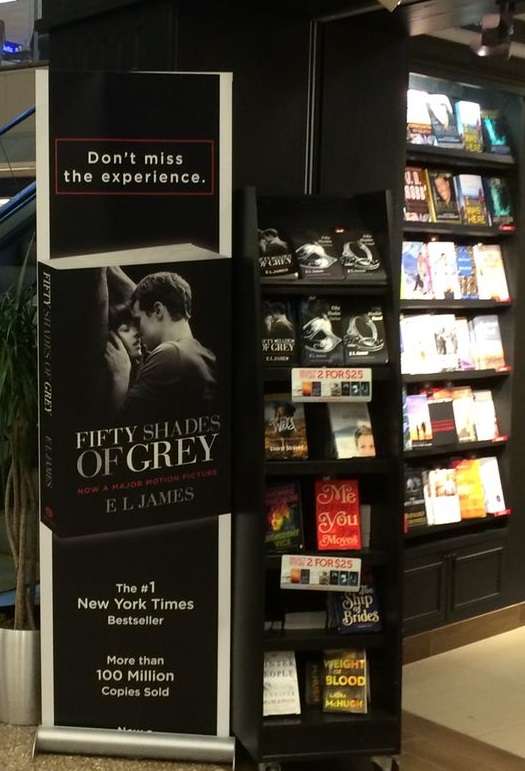 Aside from the fact that the couple in the book are not married (sin of fornication), receiving sexual pleasure through the giving or receiving of pain is not in agreement with what the Bible says about sex. Sex is to be an expression of love, affection, passion, gentleness, selflessness, and commitment. Sex is to be the literal/physical expression of a married couple being “one flesh” (Genesis 2:24). To bring pain, degradation, or humiliation into the sexual relationship distorts what it is supposed to be, even when such actions are consensual. The more extreme aspects of BDSM reek of Satanism/paganism and are definitively ungodly and perverted.1

What caught my attention was the statement at the top of the banner “Don’t miss the experience”. Reading that, I envisioned the serpent in the garden talking with Eve, tempting her to eat of the fruit of the tree of knowledge of good and evil. Today, all over the nation and countries abroad, that same serpent’s voice is woven into these enticing words…don’t miss the experience of sexual temptation. A temptation that can lead to one of the most destructive sins in the history of mankind. Sexual Immorality.

While the movie was trashed by the critics as tedious and boring, the Fifty Shades of Grey made over $300 million dollars in its first week. There is such a draw for the movie that hundreds of teenagers under 17 rushed a theater in a Florida Mall to protest not being able to see the movie due to it R rating. The draw of the movie is the sexual temptation it creates and the sexual sin it can lead to.

Sexual sin (sexual immorality ) is any sexual activity that resides outside of the marriage covenant between a man and a woman as outlined documented in Genesis 2:24, Matthew 19:6, Mark 10:9, Genesis 1:28. This includes lusting in the heart over someone’s physical body. (Matthew 5:27-28).

Sexual sin is unique because it not only affects the people around you but is also a sin that the Bible states is a sin against your own body, which if you are a Christian, is the Temple of the Holy Spirit (1 Corinthians 6:18-20).

Furthermore, sexual sin leaves in its path, a destructive wake to those involved that can lead to one or more of the following results: shame, depression, loss of integrity, addiction, social regression, mental illness, disease (STD), adultery, broken families, divorce, fear, violence, rape, slavery, human trafficking, child abuse, untimely death, suicide, abortion (prenatal murder), and murder. And worse, if not repented from, can ultimately lead to eternal death and separation from God.

It is no surprise that Satan, the current ruler of this world since the fall of man, has capitalized on sexual temptation and as a result, has drawn millions into the destructive bondage of sexual sin. Entertainment, Sports, Advertising, and News that is produced by people not submitted to God are open to the influence of the evil one. Fifty Shades of Grey is just one more example of the sin bait that the world offers on a daily basis.

Sexual Temptation is actually just one of many symptoms that are part of the three main temptations that all the world has to offer mankind (1 John 2:16).

While these three temptations can manifest themselves in gluttony, desire for wealth, fame, or power, this article will focus on these temptations under the shade of sexual gratification. If succumbed to, can lead to breaking many of the Ten Commandments (Exodus 20:3-17, Deuteronomy 5:7-21) which is sin (missing the mark). 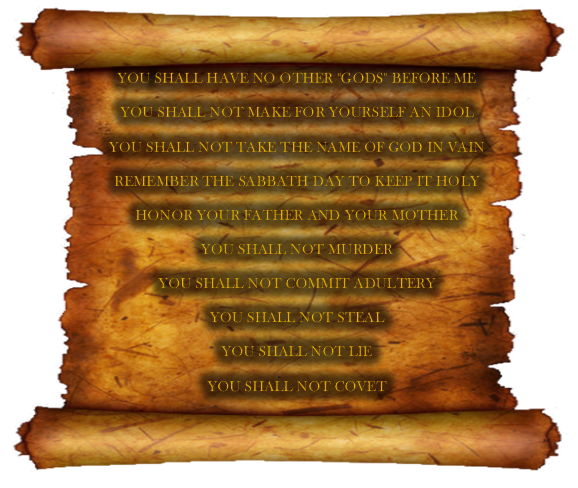 In the realm of sexual temptation, people will naturally look to “you shall not commit adultery” as the sin that would result as by its very nature centers on sexual violation of the marriage covenant. We also see that coveting (to desire something that belongs to another) can be a result of sexual temptation and is often a precursor to adultery.

In the case of King David, we see that not only he coveted Uriah’s wife Bathsheba and committed adultery with her, he ended of stealing her from her husband and murdered Uriah. (2 Samuel 11:2-12:14) And it all started with sexual temptation.

Perhaps the most egregious sins that can result from sexual temptation is to violate “you shall have no other “gods” before me” and “you shall not make before yourself an idol”. In other words, a fixation on sex or the flesh (the body) over God can make it an idol and in some cases a god to the person who is submitted to it.

In the proper setting, sex is not a sin. In fact, sex is God’s idea. In Matthew 19:4-6, Jesus states with godly authority, “At the beginning the Creator ‘made them male and female,’ and said, ‘For this reason a man will leave his father and mother and be united to his wife, and the two will become one flesh.’ So they are no longer two, but one flesh. Therefore what God has joined together, let no one separate.” The creation account is thus the foundation for the institution of marriage, which was validated by the Creator Himself and established to be a lifelong union between one man and woman.
The very fact that God created humanity as “male and female” reveals that we are created as sexual beings. And God’s command to “be fruitful and multiply” cannot be fulfilled without sex (Genesis 1:28). Sex is a God-given mandate, so there is no way that sex is a sin if done with one’s lifelong marriage partner of the opposite sex.2

God created sex, why is it wrong to be tempted by it?

First, to bring some context to the question, we have to ask why God created us. While God did create us to be a sexual being so we could procreate, the ability to have sex is not why we were created.

We in fact are unique in the creation because we are created in the image of God (Genesis 1:27). While the world will try to say through the flawed theory of evolution, we mutated out of the animal world, humans in fact were created to glorify God (Isaiah 43:7) and be rulers over the creation. (Genesis 1:28-29, Psalms 8:4-5, and Hebrews 2:6-8) Being tempted by anything (sexual or otherwise) that would draw us away from God’s or His Will in our life, can lead to sin if we choose to succumb to that temptation.

Unfortunately, mankind gave up the right to be stewards over creation when Adam and Eve succumbed to temptation in the garden and listened to the serpent’s voice, enticing them not to miss the experience of being like God. To know the knowledge of good and evil… 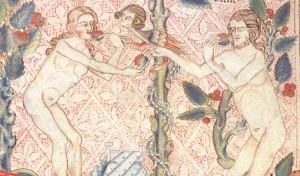 God was not trying to keep anything good from Adam and Eve, rather he was trying to protect them from evil. They still had the free will to choose. Through the Serpents prompting and deception (serpent lied; compare Gen 2:17 to Gen 3:4), Adam and Eve gave themselves over to one of the three temptations of the world, The Pride of Life. The desire (temptation) to be like God and have His wisdom of the knowledge of good and evil compelled them to willingly forget God’s warning that eating the fruit would bring death to their immortal state.

In The Fifty Shades of Gray, the entire movie capitalizes on the three temptations offered by the world veiled in the shade of sexual temptation. The Pride of Life through the unbiblical view of sexual power and dominance over another. The Lust of the Eyes and the Flesh by offering graphic sexual content and nudity throughout.

The Merriam Webster dictionary defines lust as an intense longing or craving for something. The lust of the eyes is enabled by our ability to see things and desire them. The lust of the flesh can result from anything that is physically gratifying. This may be food, drink, pleasing aromas (sense of smell), soothing sounds (sense of hearing), or tactile contact (touch).  Both of these temptations can lead to sexual lust.

The Bible says we are responsible to guard our hearts against lust (Proverbs 4:23). This is important because the result of letting down our guard can be fatal: “Each one is tempted when, by his own evil desire, he is dragged away and enticed. Then, after desire has conceived, it gives birth to sin; and sin, when it is full-grown, gives birth to death” (James 1:14–15).

As the serpent used deceit in the Garden of Eden, we must also remember the deceitfulness of sin (Hebrews 3:13). The flesh says, “I want this,” and God says, “No, it’s not good for you.” That’s when Satan steps in and says, “Maybe we can work out a compromise.”

If we desire something God has forbidden, we are lusting. Jesus said that lust in the heart is just as sinful in God’s eyes as the actual act of adultery (Matthew 5:27–28). God has blessed the sexual union of a husband and wife (Song of Solomon 5:1), and He has issued severe warnings against sex outside of marriage (e.g.,Hebrews 13:4). No one has the right to look at the nakedness of another person—or to look lasciviously at a clothed person—unless he or she is married to that person.
With sexual temptation literally being promoted everywhere, it is difficult to live purely in an impure world, and all of us struggle with this issue. We need the armor of God as we fight this battle (Ephesians 6:10–18). We should follow the example of Joseph, who, when confronted with temptation, ran away (Genesis 39:12; cf.2 Timothy 2:22). We should commit to purity as Job did: “I made a covenant with my eyes not to look lustfully at a young woman” (Job 31:1). “Clothe yourselves with the Lord Jesus Christ, and do not think about how to gratify the desires of the flesh” (Romans 13:14). 3

3 Responses to The Shade of Sexual Temptation