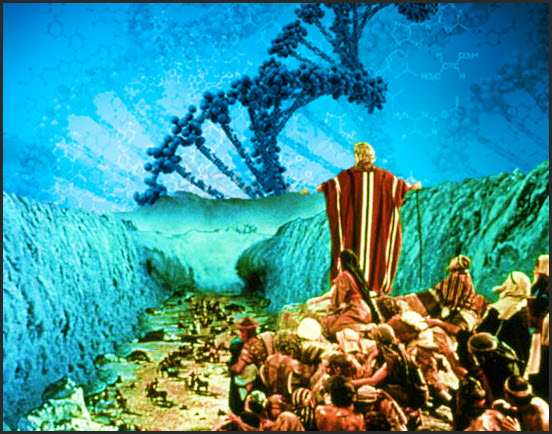 People are molecular.  We live in a molecular world, and by this virtue it is hard for us to comprehend anything that cannot be seen, heard, felt, tasted or smelled.  Therefore it is easy to put off as happenstance the occurrence of anything we cannot fit into one of our five senses.  We often wonder how God could have done all the miracles He did for Israel when He led them out of Egypt and yet they still doubted Him.  David wrote, “Our fathers in Egypt did not understand Your wonders; they did not remember Your mercies, but rebelled by the Red Sea.”  (Psalm 106:7)

They didn’t see God come down and visually part the water. What they did see and feel was a strong cold wind blowing from the east  that eventually froze the water in place (Exodus 15:8) and when the sun rose the next morning, it melted the ice which held the water back (Exodus 14:27).  A “happenstance” they thought.  “We were lucky to be in the right place at the right time!”  So they missed seeing God’s hand of deliverance for them.  But we are the same way. How many times have we given credit to things in our life by saying, “I really lucked out,” when it was God’s hand all along?

After Russia and her Muslim allies are defeated on the mountains of Israel by God’s hand, the one we call the Antichrist will step forward and take credit for the victory.  Israel and the entire world will be amazed, “And all the world marveled and followed the beast.”(Rev. 13:3).  He will seemingly have all the answers for our troubled populace and will usher in a time of peace.  Through the establishment of a world socialist order, he will cause even the poor to prosper for a short time, “….he shall disperse among them the plunder, spoil and riches; and he shall devise his plans against the strongholds….”  (Daniel 11:24).  His plans against the strongholds (rich countries such as the USA, Saudi Arabia etc.), will be to figure out a way to not only pilfer the wealth of these nations, but also gain control over them in the process.  This he will do by controlling the flow of energy into and/or out of them.  Energy is the lifeblood of any country and if energy can be cut off, then that nation will be at the mercy of the one who holds the power to do so.

This guy will hold that power in his hand and the nations of the world will be at his beckon.

He will divide the world into ten geographic areas establishing a head (governor) over each of these states: “The ten horns which you saw (on the beast) are ten kings who have received no kingdom as yet, but they receive authority for one hour as king with the beast.”  (Rev. 17:12)

The dividing of the nations has already been done by the UN under a plan known as “Agenda 21.”  Under this formulation, there will be no ownership of private property, everything will be owned by the state and the entire globe will be under the head of one person.   All farmers, for example, will be put onto collective farms with the primary impetus on “good environmental practices.”  Thus a farmer will be told what to plant and how much to plant so as to not “overburden” the land.  City and urban dwellers might get to live in their houses, but all property will be owned by the government.  Children, of course will be put into state schools, and private schools and home schooling will be banned.  Agenda 21 is a 300-page document divided into 40 chapters that have been grouped into 4 sections:

The four sections listed above are from the Agenda 21 document.  Right now, of course, Agenda 21 is “voluntary” but once accepted by the governments of each state, it will become mandatory. One of the bigger agendas of the world government will be that of gun confiscation.  Guns in the hands of the common citizen will not be tolerated.  Citizens with guns could conceivably rise up against their state leaders if they didn’t agree with the direction that was being forced upon them.  Indeed, a thoroughly disarmed populace is a helpless populace.  This is one reason why the people will say, “Who is like the beast? Who is able to make war with him?”  (Rev. 13:4)  Since he is the only one with all the guns, the answer is obvious: “No one!”

But wait, there is one who will indeed make war with him and that one will be China and her allies!  Because of cunning and deceit, China will appear to go along with this scheme, but will in fact, rise up in rebellion against him.  Remember, China represents the rider on the red horse who takes peace from the earth.

The Antichrist will make a seven year peace pact with Israel shortly after the Magog war, “He shall confirm a covenant with many for one week….”  (Daniel 9:27).  A week in this instance signifies seven years.   It will be during this seven year period that he will assist the Jews in rebuilding their holy temple, where once again they will be able to go and make their sacrifices as part of their traditions and adherence to Old Testament Law.  Keep in mind, that the Jews still believe that he (Antichrist) is their Messiah. Remember Revelation 6:2? “And I looked, and behold, a white horse.  He who sat on it had a bow; and a crown was given to him….”   Revelation 13:2 tells us where he got his crown and authority over the world: “The dragon gave him his power, his throne, and his great authority….”  The dragon, “That serpent of old, called the Devil and Satan….” Rev. 12:9

When Jesus came into the world He said of His Father: “….a body Thou hast prepared for Me….” (Hebrews 10:5).  This was the molecular man, God in the flesh.  We could see Him, feel Him and know Him on a personal basis.  We could relate to Him as He underwent the same trials and temptations that plague all of us.  The Devil also needs such a body.  A man the world can see, feel and get to know on a personal basis, just like Jesus was.  The problem for the Devil of course, he doesn’t possess the power to create life like God does, so he must spiritually inhabit a body, in other words, literally take possession of one.  A fake molecular man if you will.

When Jesus was in the world, if you remember the story, the Devil took Him up on a high mountain overlooking the kingdoms of the world and he said to Him, “All these things I will give to You if You will fall down and worship me.”   (Matthew 4:9).  While the earth and all its fullness belong to God, the kingdoms (governments) of man are still under Satan’s influence and control.  Thus, they are his to give to whomever he chooses.  After the rapture of the church from the earth, there will be nothing to stop him from taking total control of all the people and their governments that are left behind, and he moves quickly because he knows his time is running out. (Revelation 2:12)

The man he wants will be the man who has the most influence over the world, and that man will be the false messiah of Israel—the one who comes in his own name.  This is not unlike the time when the Devil entered Judas Iscariot (Luke 22:3) and enticed him to betray the Lord.  Perhaps the future Antichrist will be a man of good intentions at the start, but seeing the nations and their wealth in his grasp, he unlike Jesus, will be an easy  target for the Devil to entice.

As the world basks in the first three and a half years of Antichrist’s reign, everything will go according to Satan’s plan.  At last, he is ruler of the world.  He has expelled God and stands before the populace claiming that he is god: “Through his cunning he shall cause deceit to prosper under his rule; and he shall exalt himself in his heart.”(Daniel 8:25)  The Apostle Paul writes of the Antichrist who he calls“the son of perdition:”“who opposes and exalts himself above all that is called God or that is worshipped….”  (2 Thessalonians 2:4)

It isn’t enough that the antichrist is head over all the nations, he wants those nations and its populace to bow

down and worship him as the only true god.  He needs a high priest who will lead the world into a religious rite, forcing them if need be, to bow down and worship him.   John the Revelator describes this high priest, “Then I saw another beast coming up out of the earth, and he had two horns like a lamb and spoke like a dragon.  And he exercises all the authority of the first beast in his presence, and causes the earth and those who dwell in it to worship the first beast.”  (Revelation 13:11 – 12).   The problem with the religious system established by the false prophet is, that it becomes too powerful an entity and thus, to a large degree becomes more powerful than the antichrist and the government he has established.  This inference is found in Revelation 17:3 where John describes the church as a harlot woman: “So he carried me away in the spirit in the wilderness.  And I saw a woman sitting on a scarlet colored beast which was full of names of blasphemy, having seven heads and ten horns.”

This portrayal of  the woman sitting atop the beast seems to indicate that he (the beast) and his ten nation confederacy are dependent upon her to carry them forth as the government of all mankind.  And because, from the beginning she is in control of him, he hates her,  ”And the ten horns which you saw on the beast, these will hate the harlot….”   Revelation 17:16

In a rage the antichrist breaks his seven year pact with Israel and charges into the holy temple and there proclaims his deity once and for all.  He puts a statue of himself in the temple and commands everyone to bow before his likeness.  (Revelation 13:14 -15).  It is at this point, I believe that things start to unravel for him.  First, the Jews know that the God of heaven would never require them to bow down before an idol (Exodus 20:4), and so, their “deliverer” is now becoming suspect.  Second, there appears on the scene two guys who are  promoting the idea that Jesus Christ is the only true God and that He, and He alone should be worshipped, “And I will give power to My two witnesses, and they will prophesy one thousand, two hundred and sixty days, clothed in sackcloth.”          (Revelation 9:3  This period of time is just shy of three and a half years).  Their testimony will be extremely effective and world-wide in scope, and millions of Jews will be converted to Christianity because of their testimony.

Third, China and India, the two most populace nations on earth, will form an alliance where together they will assemble a 200 million man army.  Once this huge force becomes totally organized, they will march into the Middle East where they will be met by the opposing forces of the Antichrist and his international confederacy of nations. One third of the world’s populace will be destroyed during this monumental battle that takes place in the Middle East. I will cover this battle in a later article.