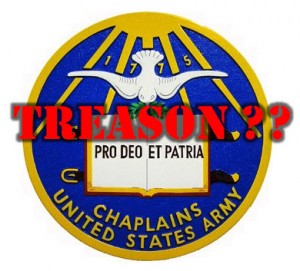 Breitbart recently reported that Michael (Mikey) Weinstein (who in December 2012, was named one of the 100 Most Influential People in U.S. Defense by Defense News), founder of the Military Religious Freedom Foundation (MRFF), has been tapped by the Pentagon to help to develop new policies on religious tolerance, including a policy for court-marshaling military chaplains who share the Christian Gospel during spiritual counseling of American troops. 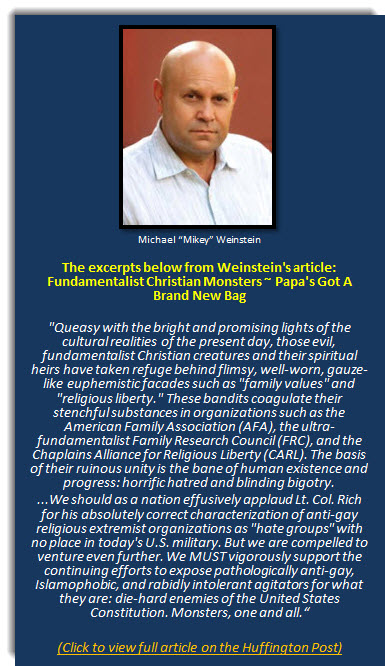 warning to those who put their faith in Jesus Christ that a new level of Christian persecution may be right around the corner in the United States of America and for her Christian military personnel (see excerpt to right).

The Breitbart article added: Weinstein makes sure there are no doubts, being quoted by the Post as adding, “This is a national security threat. What is happening [aside from sexual assault] is spiritual rape. And what the Pentagon needs is to understand is that it is sedition and treason. It should be punished.”

Under federal law, the penalty for treason is death…

While this type anti christian language may remind some of the rhetoric of the fictitious Global Community Police in the “The Left Behind Series“, it is incredible to hear this visceral hatred of Biblical values being espoused by a consultant to the Pentagon of the United States on religious tolerance. At some point in near future history, Matthew 24:9 may become a reality on US soil.

This is just a taste of the days ahead. While Christian persecution is a day to day reality all around the world (John 15:18-19), the Christians of the United States have been under a wing of protection due to the years that our Government has recognized and glorified the God of Abraham, Issac, David, and Jesus Christ, The Son of God. Sadly, this is no longer the case. Abandonment of the Truth of the Bible for the wisdom of the world has brought a moral decay on the country and a spiritual blindness that has resulted in our nation coming under God’s judgment. For those that unashamedly proclaim that Jesus Christ is Lord and the Bible, the inerrant Word of God; persecution will increase. This is of no surprise. 2 Timothy 3:12 states that those who desire to live a Godly life in Jesus Christ will be persecuted. Also see John 15:20, 1 Corinthians 4:12.

In these days it is more important than ever for Christians to unite, on their knees in prayer and fasting before our Lord, for the repentance of the country and its citizens, and for guidance, wisdom, and protection in the days ahead.

That said, rejoice in any and all sufferings you may face for proclaiming Jesus Christ and His Good News (2 Cr 4:1-18). If you do serve in the military, in whatever branch you serve, remember the Roman Centurion in Matthew 8:5-13, he as a soldier knew who to have faith in when times got tough, Jesus Christ.

In conclusion, while persecution will increase, the Word remains steadfast:“go therefore and make disciples of all the nations, baptizing them in the name of the Father and of the Son and of the Holy Spirit” (Matthew 28:19). Paul echoes Christ’s directive with this query: “How then shall they call on Him in whom they have not believed? And how shall they believe in Him of whom they have not heard? And how shall they hear without a preacher? And how shall they preach unless they are sent? As it is written: ‘How beautiful are the feet of those who preach the gospel of peace, who bring glad tidings of good things!’” (Romans 10:14-15).

Kingdoms of earth grow and wither but the Word of God is Eternal (John 1:1).

May God bless you as you seek Him through prayer and His Word, the Bible and become Salt and Light (Matthew 5:13-16) for His Names Sake!

How should a Christian respond to persecution?
If I convert to Christianity, my family will disown me, and I will be persecuted. Should I follow Jesus?
Is it wrong to be a Christian secretly in order to preserve your own life?
Does the Bible call Christians to defend the faith / argue for the faith?
What is Christian fanaticism?