How should Christians approach Gun Control? 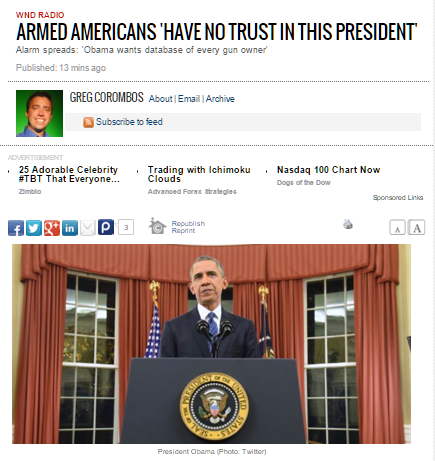 In light of today’s announcement from the President that he is going to take executive action to bypass the second amendment to fulfill his desire… the desire for the Federal Government to know who every law abiding citizen is that owns guns. This post is just as relevant today as it was when I wrote it almost four years ago to on 1/16/13. How should Christians approach gun control?

Original Post date January 16th, 2013: Today the President of the United States proposed a new wave of gun control measures that would ban assault weapons, limit 10 rounds per clip, and control armor piercing rounds. Would this have stopped Adam Lanza from his killing frenzy massacre? The answer of course is no.

By the way, we now know Lanza had a website that glorified Satan!  (Think that might have had anything to do with his evil actions? Hmmm) In fact, the Columbine massacre murderers also had associations with the occult but the Media and Federal Government does not center on such trivial matters of free speech. Too bad; it is root cause of these acts of violence…rebellion to God.

Simple fact is, criminals do not obey laws. Christian comedian Brad Stine made a very astute observation in his performance “Put a Helmet On“. “Hey if gun control works so well, why stop their? Lets ban crime!! Gee I was going to rob that man but apparently it is illegal now. I guess I have to turn to a life of labor…”

The only thing gun ban laws create is a more dangerous environment for law abiding citizens who will have a disadvantage of protecting themselves, their families, and innocent bystanders when they come face to face with a criminal or debased person that does have a gun. If any of those teachers were armed with a personal firearm in Newton, Connecticut, the story may have ended very differently and at the least, would they have had a chance to defend themselves and possibly been able to mitigate or prevent the carnage that occurred.

While the second amendment itself was designed to allow citizens of the United States to protect themselves from a Government that became totalitarian, how should Christians in America respond to such a shift in power? This question applies worldwide in whatever country you may live in, how should a Christian respond to an issue such as Gun Control?

The following new article by GotQuestions.org aptly approaches this subject:

The recent shootings across the United States have caused much heartache. The senseless and tragic incidents have also renewed the intensity of discussion regarding American gun laws. Politicians, sportsmen, and theologians have all weighed in on the issue of gun control. Guns are readily available in the U.S., and ownership is protected by the Constitution. How should a Christian view gun control? What does the Bible have to say that would apply to gun control?

The Bible was written long before the invention of any type of gun, so the phrase “gun control” will not be found in Scripture. However, the Bible records many accounts of wars, battles, and the use of weapons. Warfare is presented as an inevitable part of living in a fallen world (Mark 13:7; James 4:1), and weaponry is a necessary part of warfare. Weapons in the Bible were also used for personal protection. In some parts of Israel, robbers were common (see Luke 10:30), and many people carried weapons when they traveled. Carrying a weapon for self-defense is never condemned in the Bible. In fact, it was mentioned in a positive light by Jesus Himself on one occasion (Luke 22:35-38).

Christians are called to submit to governing authorities, and they are to obey the laws of the land (Romans 13:1-7; 1 Peter 2:13-17). This would have to apply to gun laws, too. If American gun laws change, American Christians should submit to these changes and work through democratic means toward any desired alternatives. The Bible does not forbid the possession of weapons, and neither does it command such possession. Laws may come and go, but the goal of the believer in Jesus Christ remains the same: to glorify the Lord (1 Corinthians 10:31).

Another biblical principle to consider is that “all who draw the sword will die by the sword” (Matthew 26:52). Jesus said this to Peter when Peter tried to mount an imprudent “defense” of Jesus against the mob that had come to arrest Him. Peter’s actions were not only futile against such a “large crowd armed with swords and clubs” (verse 47), but his rash behavior also belied Jesus’ submissive attitude (verse 50) and worked against the fulfillment of Scripture (verse 54). There is “a time for war and a time for peace” (Ecclesiastes 3:8), and Peter confused the two.

Christianity supports personal freedom. Romans 14:1-4 indicates that, when Scripture does not clearly address a particular issue, there is freedom for individual choice. America has historically embraced the concept of personal freedom that resonates with this principle, and the founding documents guarantee wide freedoms regarding firearms. Some point to Matthew 5:9, in which Jesus pronounces a blessing on the peacemakers, and apply it to the issue of gun control. The idea is that guns are antithetical to peace. This may be more of a philosophical or political idea than a theological one, however. There is nothing theologically, or even logically, that links guns to a lack of peace; sometimes, guns help maintain civil peace.

Debates over whether to control guns or how much to control them depend largely on political and philosophical arguments, not moral ones. This is not to say that there is no moral component to the issue. Obviously, the gun itself is amoral, an object that can be used for good or for evil. More important is the morality of the person wielding the gun, and that is too often the missing consideration in the gun control argument. The fact that some sinners use guns to commit sin does not mean guns are the problem. Sin is the problem, and that’s a moral and spiritual issue. Since the very beginning of humanity, people have been killing other people, with and without weapons (see Genesis 4). Taking a certain weapon out of circulation might make murder more difficult but by no means impossible.

As far as the Bible is concerned, the use of guns is a matter of personal conviction. There is nothing unspiritual about owning a gun or knowing how to use one. There is nothing wrong with protecting oneself or loved ones, even if it involves the use of weapons. We need not pretend there is never a need for guns, but pointing a gun at a person should always be a last resort. We should seek to neutralize threats without violence whenever possible.

So, how should a Christian view gun control? With the authority God has entrusted to it, the government has the right to allow or disallow gun ownership to whatever degree it deems right. We, as citizens, are called to submit to whatever gun control laws the government institutes. This is not, however, a statement on the wisdom of gun control. There are good reasons to allow law-abiding citizens to own guns. Ultimately, guns are not the problem. Sinful people are the problem.