SagacityWeb » Eschatology » Complete Surveillance In The World We Live

Complete Surveillance In The World We Live

In 1949 George Orwell published a book called “1984”. The fictional story portrays a society that is under complete surveillance from the government officials mainly from a two way video monitoring device called telescreens. Designed not only to pipe in a never ending stream of propaganda to form the opinions of the population, the video device was also used as a monitoring tool that had the ability to track every movement of each citizen of the fictional country Oceana. It is from this book the term “Big Brother” came into existence referencing the dictator that ruled over the state. Even 35 years after the book was written, when 1984 did roll by on the calendar, the technology to track every person’s movements was still the stuff of fiction.

Today is a different story. In an age where humans have an almost symbiotic relationship with their cell phones, smart phones, computers, and social networks, our lives are in a constant state of surveillance. It is already at use in our daily lives from the recently revealed Carrier IQ in our smart phones to surveillance of virtually every form of online activity and email. From tracking your buying habits from your debt and credit cards to facial recognition, we now live in the day where you can be tracked virtually anywhere at any time. 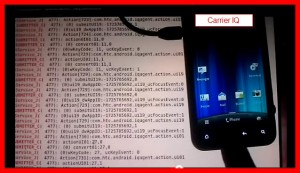 This technology has enabled many helpful and good things. RFID technology automates the simple but annoying task of driving on toll roads by eliminating the need to stop and pay if you have a “fast pass” account. The scanner reads the RIFD chip from your pass as you drive under the sensor. Facial recognition systems can and already help track missing people, kidnap victims, or criminals. Tracking buying habits helps companies make better informed decisions on their product. Currently, the world’s smallest RFID chip manufactured by Hitachi is smaller than a grain of salt! That would enable this chip to be used in virtually anything. Imagine such chips included in food ingredients. Securely tracking food distribution and location would be quite easy. 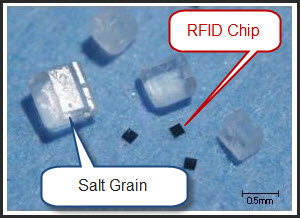 Unfortunately, this same technology can be used for control measures in a closed or repressive society. Instead of the utopian dream that the developers of such technology may have had, instead, it can be adapted to create the ability to track and control virtually every segment of life. This is already happening in many countries ruled by oppressive governments.

In the Bible, the book of Revelation tells of a coming worldwide government that will have complete control of the economy and as a result, have a stranglehold on mankind.  It states that a world leader will rise up who will have the ability to track and control every monetary transaction on the planet. It also states that he will only allow people to buy or sell if they swear allegiance to him by taking his mark. (Rev 13:16-18)

Whether this mark is a RFID Chip, an electronic tattoo, a bar code, some form of technology we have not seen yet, or even just a big 666 stamp, it will probably be linked with some oath of allegiance to this leader.

It may be as simple as a type of EULA (Software License Agreement). When it comes to buying food and keeping the lights on, many people will not think twice before signing there life away…literally. To this, I say Caveat Emptor!! (Buyer beware)  Rev 14:9-11 gives the warning that anyone who takes this mark will be lost forever.

In conclusion, George Orwell’s book gave us a view of a society controlled by a dictator who used technology to track its citizens. Our surveillance abilities have far surpassed his dark vision and the stage is now set for the appearance of a world leader who may use this technology to help fulfill his purpose of enslaving the world and the very souls of people who take his mark.