America’s Decline and its Judgment 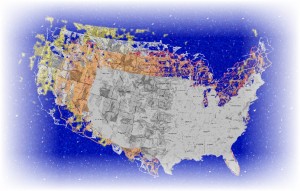 Eleven years to the day, on 9/11/12, once again, terrorism rears its head like a serpent and strikes America. This time against American Embassy’s in Cairo and Libya. So far, three Americans who served as a communication link between our country and Libya as well as U.S. Ambassador to Libya Christopher Stevens were viciously killed by a ruthless mob in the name of the god of Islam. My prayers of comfort and peace during this time of grief go out to these families who have lost their loved ones who gave their lives in service to our country.

Of interest, this article was written by Don Kopp prior to this attack and was meant to be posted on 9/11/12 as a study showing that terrorism is nothing new and of more interest, can be in part, a divine agent of warning to America not to turn away from the God of the sixty six books of the Bible. The same God the United States of America was consecrated to by our first President George Washington.

In order to better understand who the original terrorists were and what their objectives were, we have to go back several thousands of years; about 2500 years back to a kingdom no longer in existence; to the Kingdom of Assyria.  Not Syria, but Assyria.  These were the people, if you remember the story that God sent Jonah to preach to.  Jonah didn’t want to go because he hated the Assyrians but God was able to “persuade” Jonah to go preach repentance to them.  Their capital city was Nineveh and according to the Bible, it was a city of approximately 120,000 people.  (Jonah 4:11)

The reason Jonah hated the Assyrians so much is because they were extremely ruthless and blood thirsty. God’s prophet Nahum likened the Assyrians to: “A den of ravaging lions, beasts of prey, feeding on the blood of nations.” (Nahum 2:11-13). 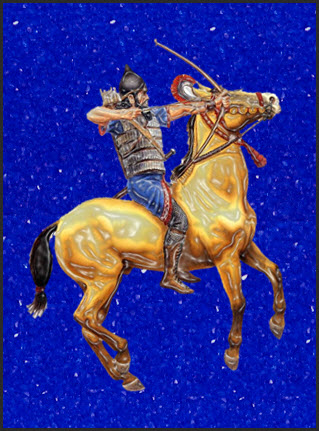 The word Assyria is derived from mât Aššur, which means “country of the god.”  “The god”, in this case Ashur was the justification for destroying nations and people and they were very good at it.  The Assyrians not only practiced terrorism tactics on their enemies, they had it down to a ruthless science.Today we see the rise of these same tactics by Islamic extremists in the name of Allah which means: “The god.”  Same people, same area, same religious goals and today they terrorize, and kill in the name of Allah…”The god.”

Throughout the Bible, God would use warring heathen nations to try and get the attention of His people Israel whenever they began to stray from Him.  Should they fail to take notice of a warning but continue on in their ways; another warning would come and usually each succeeding warning would become harsher.  And, if they continued to ignore His warnings, these harbingers generally led to total destruction of the country. 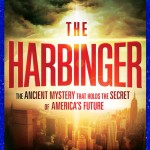 In his book, “The Harbinger,” Jonathan Cahn points out nine different warnings to America by God, like ancient Israel, America has chosen to ignore them all.   In my last writing I pointed out that hurricanes Katrina and Isaac were harbingers pointed at a given area of the country; in this case it was New Orleans because of the Southern Decadence bash that was being held there both times, at exactly the same date, seven years apart.

If we journey back in American history to the very beginning of our country, to the year 1789 and the first capitol building known as Federal Hall, located in New York, and our first sitting President, George Washington; who had just been inaugurated that year. In part of his inaugural speech, President Washington spoke these words: “The propitious smiles of Heaven can never be expected on a nation that disregards the eternal rules of order and right which Heaven itself hath ordained.”

I am thinking of a nation such as America that has kicked God and prayer out of the schools; teaches atheism in the name of science; endorses homosexual marriage and gay rights; condones murdering the unborn and bathes itself in every kind of sexual and monetary gratification it can conceive; and many, if not most of these Americans call themselves “Christians” who, by the way have a higher divorce rate then those who never go to church!  Do not these things “disregard the eternal rules of order and right which Heaven itself hath ordained”???

But on that inaugural day in 1789, President Washington, Vice President John Adams along with both houses of congress then marched several blocks away to a small church on the corner of Broadway and Fulton streets in Long Island New York, to dedicate the birth of our new nation to God Almighty.  The name of the little church is St. Paul’s Episcopal Church; I say “is” because the church is still there. 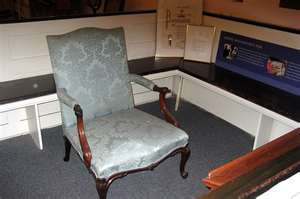 This is the seat where President Washington sat as he attended services in that small chapel, and probably sat in, as he consecrated the newly formed Republic to God.

I regress now to the nation of Israel 2500 years ago.  Israel, at that time had the most powerful military in the world.  And under the leadership of King Solomon years prior to that, had became the wealthiest nation on the planet.  But they like us, drifted away from God to the point of mocking Him.  It was strictly forbidden to even mention His name and they hunted down His prophets and killed them for it.  They murdered their children as they offered them up to the various gods’ of Baal.  And they, like us, pursued every form of illicit pleasures life could offer. So 2500 years ago, God sent the Assyrians against them as a warning to turn from their wicked life style and come back to Him.  The Assyrians didn’t destroy the country then, but through a series of “terrorist” type attacks, badly damaged the nations’ infrastructure, and its military and economic prowess.  But what did Israel do after the attack?  Isaiah 9:10 records it for us; they defiantly said of this attack: “The bricks have fallen down, but we will rebuild with hewn stones.  The sycamores are cut down, but we will replace them with cedars.” Instead of humbling themselves before a God who knew it would take drastic action to get their attention; they defied Him as well as the Assyrians.  In effect, they arrogantly told God: our buildings, and walls have been destroyed, but we will build them up bigger and better.  The sycamores have been destroyed, but we will replace them with a better and stronger tree—the cedar!  It wasn’t to long after that that Israel was totally destroyed and the remaining people were led off into captivity. 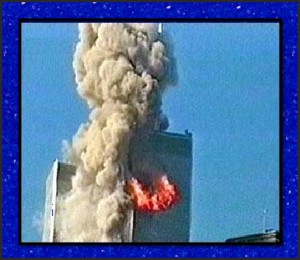 It was a bright sunny morning, that Sept. 11th 2001 when the first jet slammed into the north tower of the World Trade Center at exactly 8:46 AM.  Seventeen minutes later, the south tower was hit.  And I don’t have further need to tell you what the outcome of this catastrophe was.  The symbol of American wealth and world economic dominance was totally destroyed.  Later that morning the Pentagon, the symbol of American military might was also attacked.

Incredibly, on the very next day (Sept. 12th), Tom Daschle, then Speaker of the House spoke to the American people about the attack and he quoted Isaiah 9:10 in his speech.  Likewise, John Edwards gave a similar speech. 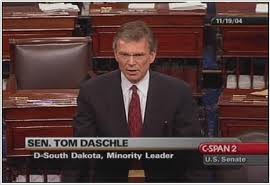 But the story doesn’t end here, not by a long shot.  You see, just across the street from the World Trade Center there was a huge sycamore tree that was totally uprooted by debris from the falling buildings. 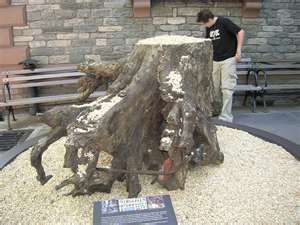 If you go online and search “sanctuary at ground zero” and click on “images” you will see pictures of this chapel. If you do a search on “cedar at ground zero” you will also see the cedar being lowered into the exact spot where the sycamore once stood. And, if you enlarge the picture of the root ball, you will see some bricks entwined in the roots. It’s our country under God, so let’s be about saving it.

And what did they replace that sycamore with?  You guessed it….a cedar tree!  Every building next to the twin towers were badly damaged or destroyed.  Every building except one; and as utterly impossible as it may seem, that building didn’t even have so much as a cracked window!  And what building would that be, you ask?  The same little chapel where George Washington dedicated America to God; St. Paul’s Chapel!!!It is this same God who blessed America more than He has blessed any nation, at any time on earth; the same nation that today seems to be trying to “go it alone,” with the same attitude that ancient Israel had 2500 years earlier. I believe St. Paul’s Chapel is a very clear signal to God’s people, because these are the people God is trying to wake up, and it is only these people who can rise to the occasion and save the nation; no one else can do it!  And if we fail, America is doomed.

“If My people who are called by My name will humble themselves, and pray and seek My face, and turn from their wicked ways, then I will hear from heaven, and will forgive their sin and heal their land.”  (2 Chronicles 7:14)

This call makes it very clear who is charged with saving our nation.  If we fail to heed God’s clear warnings and disregard it as Israel did, then we will be responsible, and I believe, live to see the destruction of our beloved country.

Don Kopp serves as a South Dakota State Representative from District 35.  He is a Bible scholar, teacher, and author of the book “Modern Science and an Ancient Text”.