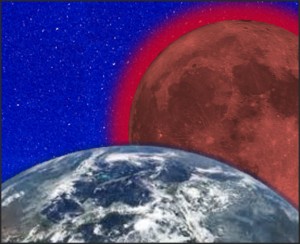 While there have been many valid correlations between recent historical events and the end time signs Jesus said would take place in Matthew 24:3-25:46 and 2 Timothy 3:1-9, we are coming up on a time starting in 2014 that may have prophetic implications on the country of Israel and possibly the world.

Through studying the Bible, the Hebrew Calendar, and NASA’s lunar and solar eclipse data, Mark Biltz from El Shaddai ministries came upon an amazing discovery back in 2008. Before I share what he discovered, first we need to share a little background that will help show how amazing his discovery was.

Studying Genesis 1:14, Pastor Biltz started looking at the entomology of the verse in its original Hebrew. The verse says: Then God said, “Let there be lights in the firmament of the heavens to divide the day from the night; and let them be for signs and seasons, and for days and years.

The verse is stating that the sun and the moon were put in place not only to divide night and day, but were also put in place for signs and seasons. In English, the word “signs” is self-explanatory and “seasons” would seem to refer to the four season’s spring, summer, fall, and winter. However, in Hebrew these two words take on an entire different meaning.

The word “signs” in Hebrew is אוֹת ‘owth which is probably from אוֹת (H225) (in the sense of appearing), a signal, a miraculous sign, an omen, or a warning. The Hebrew word “seasons” is מוֹעֵד (H4150) mow`ed   which actually means “an appointed time or a set feast”.

So this verse states that the sun and moon in part were created to show signals of appointed times or set feasts. It is interesting to note that the word mow’ed is also the same word used when referring to the Seven Feasts assigned by God to be observed by the Hebrews (Leviticus 23: 1-2). With that we see the Seven Feasts were meant as appointed times that God deemed very important.

It is no coincidence that in Jesus first appearance on earth, His death, resurrection, and sending of the Holy Spirit happened exactly on the Spring Feast days. These were Gods appointed days when these events would take place. In effect, they were and are a dress rehearsal of the redemptive works of Jesus Christ.

Since the Spring Feast Days coincided directly with Jesus Christ in His first coming, there is a logical possibility that the Fall Feast days will coincide with events tied to His second coming.

In 2008 Pastor Mark Biltz got an idea to start looking at data for lunar eclipses (known in the Bible as blood moons) to see if he could find any patterns in history. Using our current Gregorian calendar, he did not find anything but when he compared the lunar eclipse data to the Hebrew calendar, he discovered an amazing pattern. In certain lunar ceros cycles that matched the Hebrew calendar, he found a pattern of four consecutive lunar eclipses that would occur together within a Hebrew year. This phenomenon called a “tetrad” he found would occur at times directly on the appointed feast days of the Lord. And furthermore, when these lunar signs did appear on the Lords Feast days, something significant happened to the Jewish people in history.

2013 Prophecy in the News Interview with Pastor Mark Biltz

Starting on April 15th of 2014 a new tetrad will occur that will have all four blood moons fall on the Biblical Feast days. Two solar eclipses will also occur during significant Hebrew dates between 2014 and 2015. To top this off, the fourth full blood moon of the tetrad will be visible in Jerusalem and it will be a super moon! A super moon is when the moon is at its closest point to the earth (perigee) and appears larger than normal. What does this all mean?

Considered an expert in this field of study that shows the mathematical and scientific correlation between these astronomical signs and Scripture, Mark gives a compelling theory that shows the Feast of the Lord not only are tied to the redemptive events of God, they are also coincide with a lunar tetrad when a historical occurrence happen to the Hebrews. As Mark is quick to point out, he is not a date setter and warns against it. As we see above, tetrads also occurred during significant times in Jewish history. Either way, we see Gods hand is as active today as in history past. With the unrest in the Middle East and the possibility of a military conflict starting between Iran and Israel, this coming tetrad may be the signal of war ahead. On the other hand, it may be a herald of the coming fulfillment of the Fall Feast of the Lord and prophetic verses such as Luke 21:11 and 21:25.

In conclusion, while the Bible specifically warns us that no one knows the day or hour that Christ  will return (Mat 24:36, 25:13), it does say that Christians should be watchful and vigilant for Jesus return (1 Thessalonians 5:1-6). Multiple times, Jesus told illustrations and parables on what the coming of the Kingdom of Heaven was going to be like.

Are you ready for this time? Do you have a personal relationship with Jesus Christ? If not, I encourage you to accept Him as your Savior now. Click here to find out how.

May God bless you in 2014 as you seek Him through His Word and Prayer!

Feasts of the Lord Study Series