The Prophetic Rise of Russian Anti-Semitism 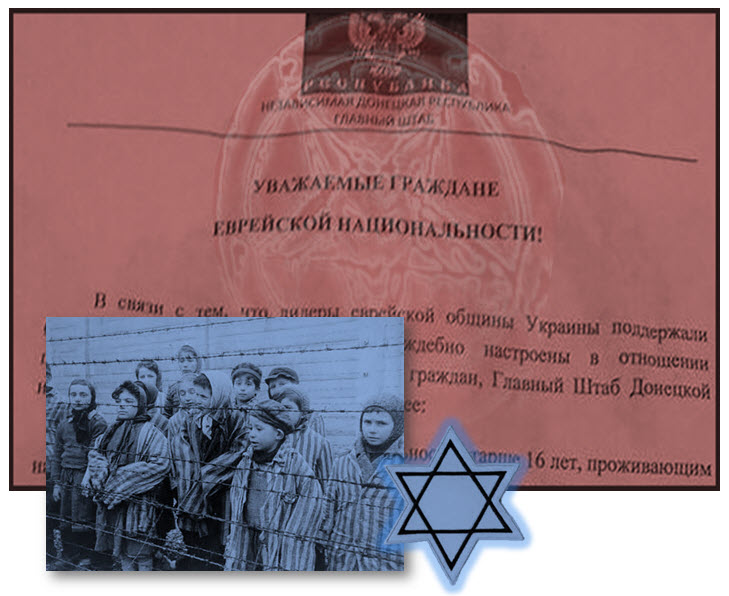 Anti-Semitism. It is seen from Germanys dark past to the current situation in the eastern Ukraine where in the city of Donetsk during the time of Passover, Jews were handed leaflets ordering them to register with the new self-proclaimed pro-Russian leadership. It is alarming and prophetic that we see the hatred against the Jews and their nation Israel has dramatically increased in recent times to a level not seen since World War II.

To find out more about the leaflet distribution in Donetsk, read the full article in the – USA TODAY

While to many, such actions by the pro-Russian leadership are considered detestable, are we seeing a glimpse of the Russian government’s true feelings about the Jewish people and the nation of Israel? Does the Bible say anything about this? It certainly does! There is an ancient prophecy in Ezekiel 38 which chronicles a future time when Russia will come down against Israel only to be supernaturally defeated by God Himself.

The following recent article from www.GotQuestions.org provides an in depth look at this end time prophecy and shows us what we may see in the not too distant future.

Does the Bible say anything about Russia in relation to the end times?

With Russia back in the news in a big way, many people are wondering if recent events in eastern Europe have anything to do with end-times prophecy—and, if so, how? Much of the discussion has to do with an ancient prophecy from Ezekiel: “The word of the Lord came to me: ‘Son of man, set your face against Gog, of the land of Magog, the chief prince of Meshek and Tubal; prophesy against him and say: “This is what the Sovereign Lord says: I am against you, Gog, chief prince of Meshek and Tubal”’” (Ezekiel 38:1–3). The identities of “Gog,” “Magog,” “Meshek,” and “Tubal” are the key to fully understanding the prophecy.

Magog is a land “in the far north,” from Israel’s point of view (Ezekiel 38:15; 39:2). Most Bible commentators interpret “Magog” as Russia—and, indeed, Russia is straight north of Israel, all the way up to the Arctic Circle. According to this view, “Rosh” is a reference to Russia, “Meshek” is either Moscow or the people north of the Black Sea (the area of southern Russia and Ukraine), and “Tubal,” which is always listed with Meshek in Scripture, is identified as a city in Siberia or an area in central Turkey.

Others see “Magog” as a general term used in Ezekiel’s day to identify barbarians living near the Black and Caspian Seas. Regardless of the exact locations of Magog, Tubal, and Meshek, there is no doubt that the general area includes portions of Russia and the former Soviet Union, and possibly some Arab countries.

So, yes, the Bible does mention Russia, although not by that name, in connection with the end times. Ezekiel 38—39 definitely refer to a nation coming from northern Asia to attack Israel. After the Cold War, Russia lost its superpower status, making the fulfillment of Ezekiel’s prophecy seem unlikely in some people’s eyes. However, recent events have shown that Russia is gaining strength, and many believe that the invasion of Crimea is just a first step in Russia’s plan to restore its dominance in that hemisphere. It is also interesting to note that, in the Soviet era, Moscow was solidly aligned with several Muslim countries in opposition to Israel. Since the breakup of the Soviet Union, Russia has continued to make overtures to the Muslim world.

According to the Bible, there will come a time when Russia, in alliance with several other countries, will amass a huge army against Israel, with a view to plunder the Jews’ land. The nations aligned with Russia for this military endeavor are Persia (modern-day Iran), Put (modern-day Sudan), Cush (modern-day Libya), Gomer (part of modern-day Turkey), and Beth Togarmah (another portion of modern-day Turkey or possibly Syria). Most of these nations are currently militant Islamic states with an express hatred of Israel. Ezekiel says that, when the aggressors move against Israel, a few other nations (“Sheba and Dedan and the merchants of Tarshish”) will remonstrate, as will “all her villages”—possibly colonies (Ezekiel 38:13). Sheba and Dedan are associated with areas of northern Africa. Tarshish could be a reference to Spain (which colonized much of South America), Britain (which colonized the United States), or somewhere in eastern Africa. The objections to Magog’s aggression will fall on deaf ears, however, and the invasion will continue.

Some commentators believe this war is one of the events leading up to beginning of the tribulation. Others believe it will occur close to the midpoint of the tribulation, since Israel will be “dwelling without walls, and having neither bars nor gates” (Ezekiel 38:11)—in other words, Israel will feel secure at that time, possibly because of the covenant they have signed with the Antichrist (Daniel 9:27). Either way, this battle is distinct from the Battle of Armageddon, which occurs at the end of the tribulation.

God promises to destroy Gog’s army: “I will execute judgment on him with plague and bloodshed; I will pour down torrents of rain, hailstones and burning sulfur on him and on his troops and on the many nations with him” (Ezekiel 38:22). The bodies of the fallen army of Magog will be buried, but it will take over seven months to complete the macabre task (Ezekiel 39:12, 14). This supernatural judgment will have the effect of preserving Israel and turning many hearts to God: “And so I will show my greatness and my holiness, and I will make myself known in the sight of many nations. Then they will know that I am the Lord” (Ezekiel 38:23). Many will be saved during the tribulation (Revelation 7), and the fulfillment of Ezekiel 38—39 will be one means by which God will bring people to a knowledge of Himself.

There is much we do not know for certain about Ezekiel’s prophecy, including the timing of these events. However, it is clear that Russia will be involved and will in fact lead an end-times league of nations to seize Israel’s land. The prophet Ezekiel comforts Israel in much the same way as Moses had centuries ago: “The LORD your God is the one who goes with you to fight for you against your enemies to give you victory” (Deuteronomy 20:4).