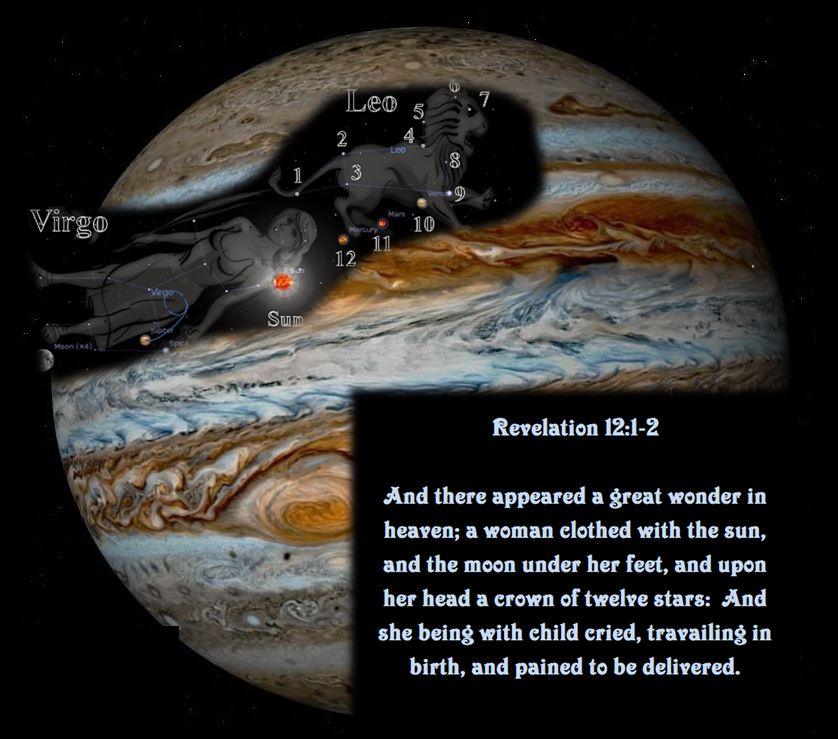 This is a story about one of the most amazing things I have ever seen.  It involves Revelation chapter twelve and the following verses.  This incredible event will take place on Sept. 23 of this year.  If you recall back in 2014 and 2015 there were four astronomical events that took place in the heavens over a 12 month period.  These events are called “blood moons” or tetrads.  A blood moon is a total lunar eclipse.  It is called a blood moon because at its fullest stage of “eclipse” the moon turns red.  The fact that four total lunar eclipses would occur in a twelve month period is itself, extremely unusual, so unusual that this has happened only seven times in all recorded history!  But wait, that’s just the beginning.  These four events landed on the Jewish holy days of “Passover” and the “Feast of Trumpets.”  That is, Passover and Trumpets on 2014 and again, Passover and Trumpets in 2015.  Is God trying to tell us something important?

The Lord in Joel 2:30, 31 said: “And I will show wonders in the Heavens…, The sun shall be turned into darkness and the moon into blood BEFORE the great and terrible Day of the Lord come.”

First, our Lord and Creator has planned from the very beginning to use SIGNS in the Heaven as “harbingers” or signals to GRAB our ATTENTION that something BIG and MIGHTY is about to happen.  Since two of the dates were the Feast of Trumpets, one could speculate (as I have) that the rapture of the church is about to happen.  The other two dates were on Passover.  Since Passover is strictly a Jewish event (no Gentiles allowed), I believe it will bring on the Great Tribulation which God uses to bring the Jews to salvation.  (See Romans 11:26, 27 and Revelation chapter 7).

But “blood moons” is not why I’m writing this article.  The signs of blood moons simply sets the stage for the final event which is laid out for us in Revelation chapter 12.  Chapter twelve, verses one and two start out:  “Now a great sign appeared in heaven: a woman clothed with the sun, with the moon under her feet, and on her head a crown of twelve stars.  Then being with child, she cried out in labor and in pain to give birth.”

As mentioned at the beginning of this article, the exact thing being described in Revelation 12 will occur on Sept. 23, 2017!!! No agnostic or atheist can deny this event because it will happen in the heavens just as prophesied.  You see, during the 24 hour period that makes up one day and that day being the 23th of Sept. the constellation Virgo (Virgin) will have the sun behind her (“clothed with the sun”), the moon will be “under her feet,” and “twelve stars” will make up her crown!  But wait, there’s more.  The planet Jupiter will be in retrograde motion inside the womb of the virgin.  It is there right now and has been for a little over eight months.  It will finally move out of the womb of the virgin on 23 September, after having spent nine and a half months in her womb.  The planet Jupiter is known as the King Star and the Hebrew name for the planet is Tzedek = צדק. The meaning is justice and also righteousness.  So you might ask yourself, how often does this alignment occur? The answer is never!  It has never happened in recorded history and using a computer generated celestial alignment chart, it would have happened 7,000 years ago.  According to creation science and using their dating methods 7,000 years is when the earth was created by God. 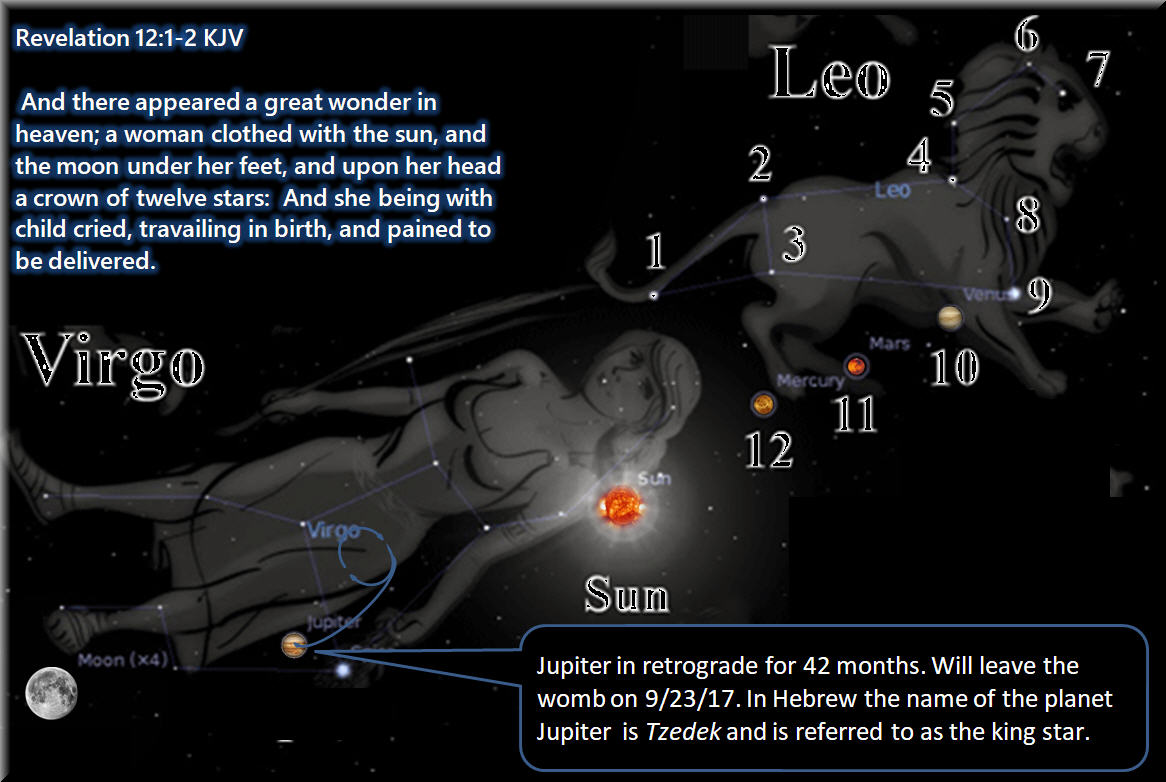 But wait, there’s more.  “She (the virgin) bore a male Child who was to rule all nations with a rod of iron. And her Child was caught up to God and His throne.” Revelation 12:5.  The Greek word for “caught up” is “harpazo,” and it’s only used twice in the Bible. The other time it’s used is in I Thessalonians 4:13-18 where Paul describes the rapture of the church: “But I do not want you to be ignorant, brethren, concerning those who have fallen asleep (died), lest you sorrow as others who have no hope.  For if we believe that Jesus died and rose again, even so God will bring with Him those who sleep in Jesus.

For this we say to you by the word of the Lord, that we who are alive and remain until the coming of the Lord will by no means precede those who are asleep. For the Lord Himself will descend from heaven with a shout, with the voice of an archangel, and with the trumpet of God. And the dead in Christ will rise first.  Then we who are alive and remain shall be caught up together with them in the clouds to meet the Lord in the air. And thus we shall always be with the Lord. Therefore comfort one another with these words.”

Christians have Christ living in them: “To whom God would make known what is the riches of the glory of this mystery among the Gentiles; which is Christ in you, the hope of glory.” Colossians 1:27.

Since Jesus lives in the church then He is literally “caught up to God” along with the church, ie., the rapture of the church!  When Jesus Who is “the Light of this world” is removed from the earth with the church, then spiritual darkness will cover the earth.  Jesus said: “I must work the works of Him who sent Me while it is day; the night is coming when no one can work.”  John 9:4.  The prophet Isaiah also alluded to this time of spiritual darkness: “For behold, darkness will cover the earth And deep darkness the peoples….”  Isaiah 60:2

Going back to Revelation 12:3,4: “And another sign appeared in heaven: behold, a great, fiery red dragon having seven heads and ten horns, and seven diadems on his heads.  His tail drew a third of the stars of heaven and cast them to the earth.”

Satan and his demons already roam the earth, but I believe the stars referred to in the above verse are demonic angels who dwell somewhere in the heavens.  Paul alludes to this in Ephesians 6:12: “For we do not wrestle against flesh and blood, but against principalities, against powers, against the rulers of the darkness of this age, against spiritual hosts of wickedness in the heavenly places.” 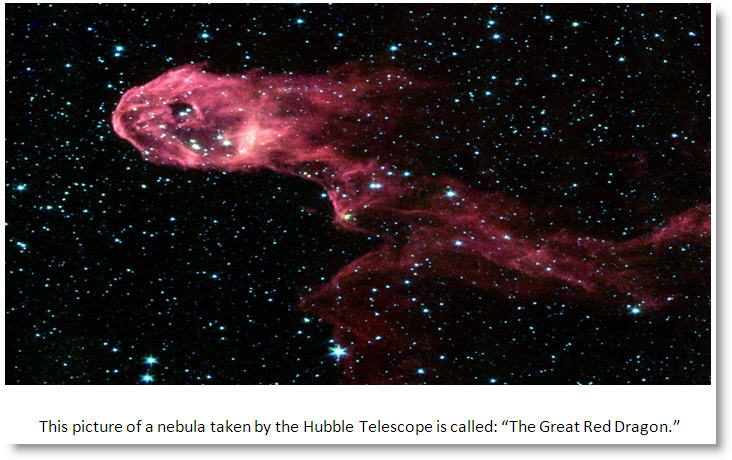 Just as the stars and planets making up a pregnant Virgin in the sky are symbolic and point toward a momentous event, so also is the fiery red dragon who casts a third of the stars to the earth a symbol that points toward a horrific event!

The devil and his angels are cast down unto the earth having great wrath because they know that their time is short, very short; seven years to be exact.  Revelation 12:12 says of this moment: “Woe to the inhabitants of the earth and the sea! For the devil has come down to you, having great wrath, because he knows that he has a short time.”

“Woe to the inhabitants of the earth and the sea!”  I believe this is a warning to all peoples left on earth after the rapture of the church that the great tribulation spoken of by the Lord in Matthew 24:21 is about to take place:  “For then shall be great tribulation, such as was not since the beginning of the world to this time, no, nor ever shall be.”  The great tribulation will be an unparalleled time of terror and death on the planet because the Spirit of God will have been removed with His church, and there will be no restraining force left on earth to hinder the devil and his demonic angels from destroying earth’s populace.  (see II Thessalonians 2:5-7).  In fact, of this period of time, Jesus said:  “And unless those days were shortened, no flesh would be saved….”

This is a great time to be alive if you’re a Christian because we are the ones that will see the culmination of the ages played out.  It will be these Christians who will never die because the rapture of God’s church will remove them from earth just prior to the tribulation event.  Editors Note: To be clear, this article is not stating that the rapture will occur on 9/23/17. No one knows the day or hour… it could occur at anytime! Are you ready?