“So he carried me away in the Spirit, into the wilderness.  And I saw a woman sitting on  a scarlet beast which was full of names of blasphemy, having seven heads and ten horns….And on her forehead a name was written: MYSTERY BABYLON THE GREAT, THE MOTHER OF HARLOTS AND OF THE ABOMINATIONS OF THE EARTH.”  Revelation 17:3 & 5

This is John’s description of the great harlot “who sits on many waters,”  (Rev. 17:1).  This idea portrays the fact that she is world-wide in scope, which is also borne out by verse 15 that says, “The waters which you saw where the harlot sits, are peoples, multitudes, nations, and tongues.”

She is called a harlot because she prostitutes herself to all of man’s filthy idolatrous dreams and incantations and is absurdly lewd in all her ways.  The children of Israel had problems with whoring after other gods throughout their history.  While speaking of Israel after God brought them out of Egypt, Samuel wrote, “And they were unfaithful to the God of their fathers, and played the harlot after the gods of the peoples of the land, whom God had destroyed before them.”  (Chronicles 5:25).  Prior to that, God sternly warned them to abstain from following after other gods and demons.  In Leviticus 17:7, God told Moses, “They shall no more offer their sacrifices to demons, after whom they have played the harlot.”

The prophet Nahum predicted the rise of the harlot of Revelation 17, and he quotes the Lord as saying, “Because of the multitude of harlotries of the seductive harlot, the mistress of sorceries, who sells nations through her harlotries, and families through her sorceries.  Behold, I am against you,’ says the Lord of hosts; I will lift your skirts over your face, I will show the nations your nakedness, and the kingdoms your shame. I will cast abominable filth upon you, make you vile, and make you a spectacle.” (Nahum 3:4).   Keep in mind that the word “sorceries,” in Hebrew is “keshaphim” which means, “witchcraft and/or enchantments.”

But the harlot of Revelation 17 is no longer just Israel following after other gods and goddesses but rather she represents the modern day “Christian” church that accepts into her ranks all forms of religious practices and idolatry.

In order to better understand the symbolism John is using here, we must first take a journey back in time since this harlot is the “MOTHER OF HARLOTS.”  This journey takes us back about 1,500 years before Christ and a time approximately 200 years after the flood of Noah.  This was a period when the world was indeed a “wilderness” and not extensively populated by people.

In Genesis 3:20, Eve is called “the mother of all living.”  That is, of every person who has ever lived on this planet, Eve was the original progenitor.  Likewise, “Mystery Babylon” is the progenitor of every false religious doctrine on the planet and all false religious systems can be traced back to the plain of Shinar.  The word Shinar is translated as “Babylonia” and it was here that the first religious revolt against God took place under the leadership of Nimrod.  The name Nimrod means “rebel” in Hebrew, and Marduk in the ancient Babylonian language.  Marduk means “calf of the sun,” and he (Nimrod) literally became a pantheistic god figure to the people.  In fact, it was to Marduk that the children of Israel, seven hundred years later, would craft the golden calf that angered God to the point of wanting to destroy the whole tribe of Israel.

Modern science gives Darwin the credit for evolution and refers to him as “the father of evolution.”  Yet in reality, it was the ancient Chaldeans under the leadership of Nimrod that evolution was born. 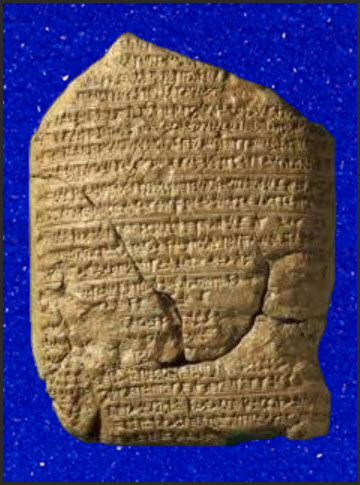 Pictured here is an example of a Babylonian tablet that discusses the evolution of the world.  The idea being presented by the author of this clay tablet (hieroglyphic) is that man can eventually evolve to the point of becoming a god.  Nimrod portrayed himself as one who had arrived, i.e.,  became god.  He eventually married his mother whose name was Semiramis.  Since Nimrod was supposedly a god and Semiramis was his mother, she became known as “The Queen of Heaven.”  This also gave rise to the first feminist movement in the world, and this movement was to infect the Children of Israel to the very depths of their souls as child sacrifice became the rite and the right of the women.  It was also this religious ideology that gave rise to the feminist mother who became “Mother Earth,” or Gaia as it is known today.

Not only did they murder their children in religious (demonic) rituals, they also murdered their unborn children as well.   God’s prophet, Jeremiah wrote of the Jewish women, “Also on your skirts is found the blood of the poor innocents, I have not found it by secret search, but plainly on all these things.”   (Jeremiah 2:34).  They were brazen about it and didn’t try to hide their atrocities, indeed, they believed it was their right as they sacrificed to their goddess mother and Baal, her environmental counterpart.

Again, Jeremiah would warn the women of Israel for their idolatrous affair with the queen of heaven, this is how they answered him, “The women said, ‘And when we burned incense to the queen of heaven and poured out drink offerings to her , did we make cakes for her, to worship her, and pour out drink offerings to her without our husbands permission?’”  (Jeremiah 44:19).

Today, evolution, witchcraft, Gaia (environmentalism), humanism and feminism fit together quite readily, ironically these ideologies together are called, “New Age.”  I say ironically because there is nothing new about them since they’ve been around for thousands of years.  They easily fit together because they are agreed upon one thing; they hate Christianity in its true form and will continue to war against Jesus and His church until they are finally subdued by Him in the end. 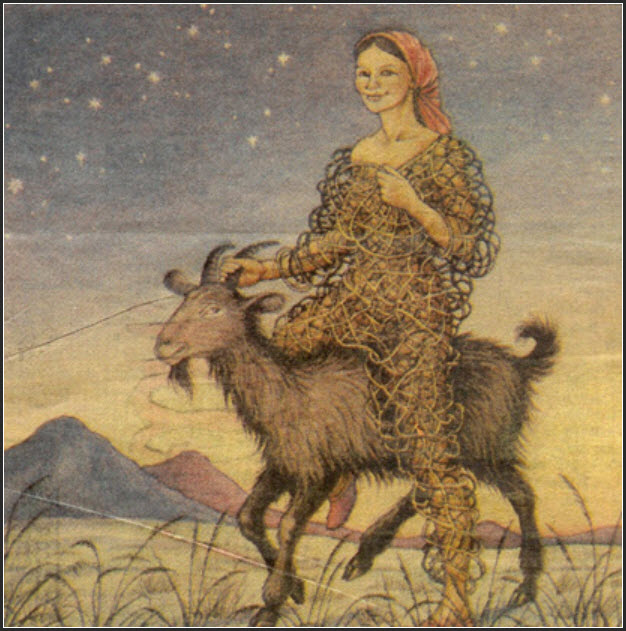 The picture above appeared in the Rapid City Journal on March 1994 submitted by a New Age group who claimed this picture is one of several being used as an icon for the New Age movement.   Clearly it is a woman riding a goat in the wilderness.  Interestingly enough, the head of a goat with horns, like this one, is also a satanic symbol.

Other satanic symbols regularly being used today by the new age, are upside down stars (pentagram) and the so-called peace symbol which symbolizes “peace without God,” and of course, a goat’s head with horns.  Many people wear these symbols as jewelry, probably not understanding their true significance.  And like New Age religion, there is nothing new about these symbols which have been around for centuries.

Today, the modern Christian church has accepted into its ranks all kinds of New Age beliefs and traditions.    The acceptance of evolution for example, has caused a noticeable shift toward apostasy in the Christian churches.   The idea that God used evolution to bring about His creation is, of course, contrary to God’s infallible word.  “For in six days God created the heavens and the earth and on the seventh day He rested,” is quite contrary to the millions of years required by evolution.

Evolution is a pantheistic religious ideology.  For example, in his book titled, “Nothing in Biology Makes Sense Except in the Light of Evolution,” Thedosius Debzhanskyp writes, “Evolution is a general postulate to which all theories, all hypotheses, all systems must henceforward bow and which they must satisfy in order to be thinkable and true. Evolution is a light which illuminates all facts, a trajectory which all lines of thought must follow.” (p.3).

God will not honor any church that does not believe, as Jesus Himself said, ”From the beginning of the creation, God made them male and female.”  (Mark 10:6).  They were, from the very beginning, a man and a woman and no stages of evolution were required by Him to bring that about.  Thus, to interject any other dogma into that, is in essence, to call Him a liar.  Because they (the apostate church)are accepting pagan ideology in their pulpits, He will allow “the lie,”  (II Thessalonians 2:11) to overtake them. The acceptance of homosexuality is just one example of  adopting what is not Christian, and rejecting what is Christian, that is, replacing Biblical truths with the lie.  Today, we see the Harlot of Revelation 17, the apostate church rising up from the sea of humanity.

This harlot church is necessary to assist the Antichrist in the establishment of a one world government, a one world religious system and a one world monetary system.   Once a global money system is in place, governmental sovereignty will be abolished.  This is because a one world monetary system (world bank) can and will force the nations of the world to accept the direction it wants to take simply by withholding funds from that country.  The US government already does this with the states.  If a state doesn’t kowtow to the wishes of the federal government than they threaten to withhold monies for road building projects, etc., until that state acquiesces to its demands.  By holding federal funding as a leverage over the heads of sovereign states, they can force that state to accept the direction the government wants to go and the voice of its people are effectively silenced.  But politics alone are not enough to hold the allegiance of the masses, religion must also play a role in order to keep the masses from revolting against the government.  As long as government and religion are in agreement, the masses will be satisfied and those who aren’t are simply branded by society as trouble makers, bigots, and/or racists.  Sounds familiar doesn’t it?

Next time from Don Kopp: 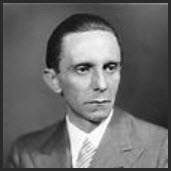 In the next writing, as you will see, those who refuse to accept the direction of a one world order will simply be disposed of as Hitler, in like manner, did with the Jews.  And like Hitler, the New World Order must be in control of the news media, and the churches or “the lie” won’t work.  As Hitler’s minister of propaganda, Joseph Goebbles once said, “If you tell a lie big enough and keep repeating it, people will eventually come to believe it.   It thus becomes vitally important for the State to use all of its power’s to repress dissent, for the truth is the mortal enemy of the lie, and thus, by extension, the truth is the greatest enemy of the State.”