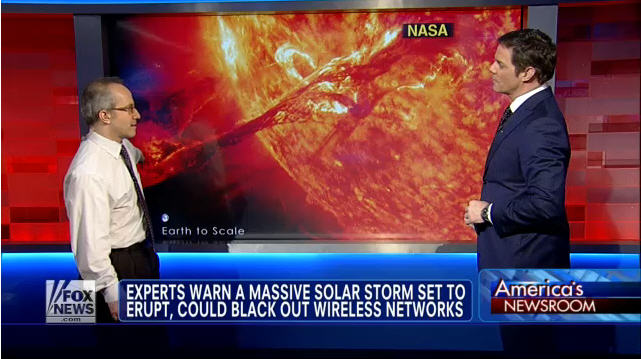 Sunny, with a mild chance of catastrophe? A massive solar storm, like the one that knocked out radio communications all over the U.S. in 1958, is coming, and this time the devastation could total as much as $2 trillion, experts told FoxNews.com. Call it the perfect solar storm.  Read more and view the video interview on FoxNews:

The perfect solar storm? Sun eruptions to peak in 2013

The Magnetosphere. God’s blanket of protection.

The earths dense core emanates magnetic fields that extends roughly 40,000 thousand miles outward from the planet and acts a shield from charged particles from the solar winds that flow out from solar storms CME’s (coronal mass ejections). When these charged particles hit the magnetosphere, the radiation is dissipated through a discharge at the magnetic poles. When strong enough, the effect can be seen and as what is known as the Aurora Borealis (Northern Lights).

Without this blanket of protection, what we see and enjoy as an incredible light show would become a deadly wave of radiation that would wreak havoc on earth.

Will God use the behavior of the sun to play a part in the end times?

The sun is mentioned in the Bible as a method of showing signs and adminstering judjment, especially in the end times. Luke 21:25 states that there will be signs in the sun, moon, and stars as well as the sea and waves roaring. A few years ago, Pastor Mark Biltz discovered that there will be an incredible line up of lunar and solar eclipses that very well appear to be some sign from the Lord.

In the years 2014 – 2015 a rare Tetrad sequence will occur on the Jewish Holidays of Passover and the Feast of Tabernacles. In addition to the Tetrad occurrence, two total solar eclipses will complement the four lunar eclipses (blood moons) on the Jewish New Year and the Feast of Trumpets. The odds of these 6 astronomical occurrences coinciding directly with 6 Biblical appointed feast are well…astronomical!

The Bible also speaks of the sun being used as an insturment of judgment and opportunity for people to repent and turn to God. As the Fox News article alluded to, a well aimed CME could literally black out the entire global electrical grid including communications, lights, water pumps, vehicles, etc. Daily ammeniteis that electricty provides, could abrubtly stop for billions of people for possibly many days. GPS, Satelitte Communcations and Sattelite TV may be knocked out until either the fried sateliites are fixed or replaced.

On a more ominous possibility, if we were to have a magnetic pole reversal which many scientist believe is possible and has occurred historically, it is theorized that in such an event, the magnetosphere may become weakended during the shifting process and hence allow for higher levels of radiation to wash across the face of the earth. This also has credence as the Bible states in Revelation 16:8-9: Then the fourth angel poured out his bowl on the sun, and power was given to him to scorch men with fire. And men were scorched with great heat, and they blasphemed the name of God who has power over these plagues; and they did not repent and give Him glory.

The Bible describes what is going to happen at this future period in time, it does not neccearly state “how” God will administer the judgment. God is the creator of the physical universe and it pyhsical laws so He can easily allow a polar shift and a CME to coincide with each other if He chose. Why would He do that?

As the moral compass of the inhabitants of earth continue to turn south from God and His Word, do not be surprised to see trouble and catastrophe increase in the world we live in. In these last days, pain and suffering will continue to rise as a result of mankind’s increasing rebellion to God. 2 Tim 3:1-4 states: “But know this, that in the last days perilous times will come: For men will be lovers of themselves, lovers of money, boasters, proud, blasphemers, disobedient to parents, unthankful, unholy, unloving, unforgiving, slanderers, without self-control, brutal, despisers of good, traitors, headstrong, haughty, lovers of pleasure rather than lovers of God…” sounds like a description right out of the evening news.

That said, 2 Pet 3:9 states that “God is not willing that any should perish but come to repentance” from sin and turn towards Him through belief in His Son Jesus Christ. Unfortunatly sometimes it takes hard times or catastrophe to shake people into realization of what is really important. Not the temporal desires of this world that is fleeting and ultimatly leads to eternal destruction, but rather, the promise of God to have an eternal fellowship with the Creator of the Universe! (1John 2:15-17).

In conclusion, we are living in a time that is due to see natural and supernatural events at a magnitude as never before in history. If you are a Christian, make Matt 28:19-20 a primary goal in your life, if you have not accepted Jesus Christ as your personal savior. Now is the time to do so. DO NOT WAIT. May God bless and keep you as you follow after Him!

Will the sun really be turned to darkness and the moon to blood (Joel 2:31)?