NASA…Just what part of Origins Research don’t you understand? 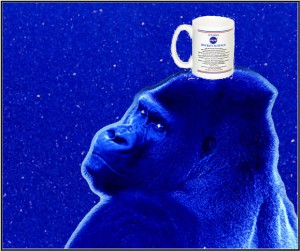 I have a coffee cup, full of steaming coffee that I am enjoying right now, that is from NASA Kennedy Space Center. It states “Just what part of (a lot of mathematical formulas) don’t you understand? It is only rocket science!” I love the cup, rockets, and the exploration of space.

While NASA may have rocket science down, when it comes to a question of origins, it seems the space agency is grounded in the evolutionary mud. Fox News ran an Associated Press article today reporting that Former NASA specialist David Coppedge claims he was fired over his belief in intelligent design.

While the jury is still out to see if the National Aeronautical Space Agency violated Mr. Coppedge’s First Amendment rights of the U.S. Constitution which guarantees basic rights such as freedom of speech and religion, the deeper question is why is the status quo in scientific academia so aggressively biased against intelligent design? Well, to be specific, Biblical intelligent design.

NASA does not have a problem in supporting Francis Crick’s theory of Directed Panspermia that states that aliens may have directed the evolutionary path of our species. 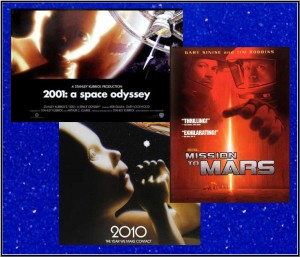 Movies that use the theory of Directed Panspermia

A view that has been sensationalized by movies such as 2001 a Space Odyssey, 2010 and more recently, Mission to Mars.

Aliens that loaded a DNA cocktail into the earths natural evolutionary process to direct life?!? … Now that takes a lot of faith!! More faith in fact than taking the Bible at its word about origins.

As a matter of fact, the observable geological, astronomical, and historical evidence matches a Biblical creation much better than the religious theory of evolution. I say religious because the theory of evolution takes a lot of blind faith in a belief system that is in direct contrast to the observable geological evidence and the Second Law of Thermodynamics. This of course is not the stance of the media backed academia. While there are P.H.D. level scientists in practically every field of science that supports intelligent design, their voice is silenced by scholars who proselytize their religion of atheism.

Don Kopp, author of “Modern Science and an Ancient Text” provides a humorous, well balanced debate of the two theories. 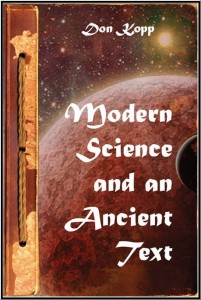 Once an evolutionist, Don aptly presents both the Evolutionary and the Creation Model for origins and considers their merits when applied to the test of science. While he will take you on a tour of Physics, Astronomy, Geology, Biology, Anthropology, and even a bit of Climatology, you will find Don’s explanations easy to understand and in the end shows that Darwinian evolution has some major hurtles to overcome to even be considered a valid theory of origins.

In conclusion, most of us were raised and indoctrinated with the theory of evolution. Once people start their own objective study of origins, if they already profess Christ as their Savior, they will have joy to find out that the entire Word of God can be relied on as accurate and infallible. If they are atheists, then they like so many before them, could come to realize that there is a God that had an incredible plan from before time to allow us to have an eternal relationship with the Creator of all things. If NASA only looked at the universe from a Biblical perspective, I wonder what they would find?

“What are some flaws in the theory of evolution?”

“What is the Intelligent Design Theory?”

“Is the Bible truly God’s Word?”

Questions about the Bible