In light of the recent news update concerning the “God Particle” , I have reposted this older Sagacityweb artcle concerning how the Bible and what we observe in particle physics relate. Also view an update on this subject by Gary Stearman on Prophecy in the News (Click Here to View) ~ 3/15/13 Erik Lee/Sagacityweb 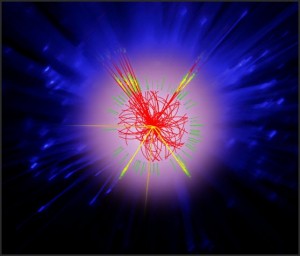 In Search for the Higgs Boson “God Particle”

In the recent news article titled “What Should ‘God Particle’ Be Renamed? Physicists Weigh In” the story centers on scientists who are upset that the Higgs Boson particle is also known as the God particle. In fact, many of them hate the term! Clara Moskowitz, Senior Writer of LiveScience had a quote in her article from one scientist:

“I detest the name ‘God particle,'” Vivek Sharma, a physicist at the University of California, San Diego, and the leader of the Higgs research at LHC’s CMS experiment, wrote in an email. “I am not particularly religious, but I find the term an ‘in your face’ affront to those who [are]. I do experimental physics not GOD.”  The article went on to state that another physicist vehemently agreed.

Wow, those are two strong words from the world of supposed objective scientists. The Merriam-Webster Dictionary defines detest as a feeling of intense and often violent antipathy towards something and vehemently means to display an intense, impassioned emotion.

In fact, this display of emotion is due to their bias against finding proof that God exists. And bias is not a bad word! In this article, by using the word bias I am stating that each person has a natural partiality or tendency towards one method of thought over another. If a scientist claims they are unbiased, that means that they will objectively observe all theories presented and using scientific method test to see which method is most viable. When words such as detest, hate, and to do so vehemently comes out of a scientist’s mouth, you know immediately that their research is limited to their faith in how they think physical world came into existence. The hypothesis that “God created” would not even be considered due to their bias.

Personally, I think particle physics lines right up with scripture and scripture is not silent about it! As a matter of fact, Hebrews 11:3 states: By faith we understand that the worlds were framed by the word of God, so that the things which are seen were not made of things which are visible. Amazing that this verse, penned around 70 AD gives a clear description of the invisible atomic universe that provide and make up the building blocks of everything we see around us.

While much study is currently being done to find the Higgs Boson God particle, I believe we can already find Gods finger prints with the nature of another sub-atomic particle called the psi-meson. 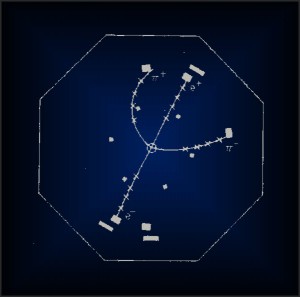 Psi-Meson gets its name from its decay signature that shows a near-perfect image of the Greek letter psi. Source:© SLAC National Accelerator Laboratory.

Aptly nicknamed “Atomic Velcro”, a psi-meson is a sub-atomic particle that got its name due to its prime decay signature that shows a near perfect image of the Greek letter psi.  The electromagnetic energy ( light ) found within the psi-mesons is what causes the spin of sub-atomic particles. In turn the spin of these particles generates an electrical field that literally holds the atom together. This bonding is known as strong nuclear force.  Psi-Mesons are very unstable. From the time it appears to the time it changes into a different particle takes place in about a forty millionth of a second.

It has been said that the Bible is not a science book but it is a book that is full of scientific relevance. Let us look at a few passages that build upon each other concerning light (visible electromagnetic energy) and the psi-meson.

So we have many references showing that light (electromagnetic energy) is an attribute of God but is there anything in the Bible that could be referencing the electromagnetic behavior of the Psi-Meson? 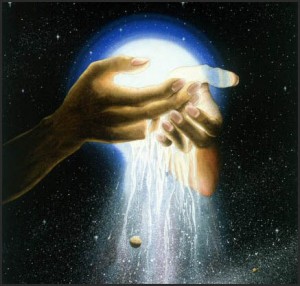 In this passage, the Greek word for “Consist” is synistēmi which literally means “to band together”. In other words, through Jesus Christ, all things in our material universe are bound together by His Power.

In conclusion, with a starting theory that the 66 books of the Bible are the infallible Word of God, we should be able to use our five senses and find evidence in the world around us that would fit what the Bible has chronicled. When it comes to sub atomic particles, what has been discovered so far with the psi-meson line up perfectly with how the Bible describes God. And if the Bible is truth (which my bias believes it is), we actually know that they are all God’s particles. Or maybe we should just say God’s Legos!

What is the God particle?

Does God exist? Is there evidence for the existence of God?

Is the Bible truly God’s Word?