Bus Driver Punished for Defending Himself from Attacking Youth 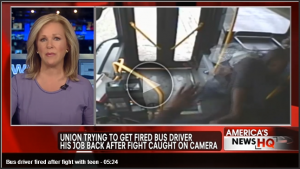 Kenoshawnews reported that on Jan. 17, bus driver Scott Wells was picking up students at Tremper High School when a 15-year-old student came to the front of the bus and punched him twice in the face and breaking his glasses. The video clip shows the teen attacking the driver who then got out of his seat to push the teen off and back into the aisle.

The bus driver is seen hitting the attacker twice before getting up and telling the youth to get off the bus. In the attack, the bus driver failed to put the bus into park which resulted in the bus rolling into three stopped cars while the driver subdued the student. The incident resulted in the termination of the driver and an attempt from the mother of the assailant to press charges on the driver for defending himself. To see the actual bus video, (Click Here) to see the Fox News article that covered this story.

What does the Bible say about this incident from the perspectives of the Assailant Teenager and the Bus Driver?

According to the video, the bus driver claimed there was some sort of verbal disrespect from the youth on a previous ride, the video shows the driver making a statement about the bus pass no longer being any good and then from the student “that is bull— man”  and then attacked the driver, hitting him twice before the driver started to defend himself.

While we do not know the whole backstory from this, it is evident that the youth was disrespectful and angry with no regard to the authority of the bus driver or the safety of those on the bus itself. We start to get a clue to one of the causal factors of this incident as seen in the reaction of the parent who wanted to criminally charge the bus driver for defending himself. This shows from the parent a lack of awareness or caring for her offspring to take responsibility for his own actions. In this case anger, lack of respect, and rebellion to authority resulted in a felony assault and arrest of the teenager.

In many parts of the world and not too long ago in our own countries history, a boy was given the responsibilities of an adult as early as 13 years of age. Indeed in the early years of our country John Quincy Adams became our first ambassador to Russia to build diplomatic ties between the nations… at age 14! Why were first graders in 1900 answering questions that our college students can’t answer today? Why are our students lagging behind academically as compared to their peers in other countries? What has happened in our society? Has the human species in western society physiologically become more primitive intellectually? No of course not. One hundred years ago in the United States, more was expected of them!

One of the main reasons the youths of today have a lower level of intellectual, ethical, and moral maturity is due to the fact that our society has moved away from the moral standards of the Bible.

Back in 1892, when Separationism, Darwinism, and Secularism were starting to gain a foothold in America, the seeds of deception where starting to grow that challenged the authority of the Bible as objective truth. In 1897 John Dewey , an atheist and one of the signatories of the humanist manifesto, started propagating the idea that teachers should no longer “impose certain ideas or to form certain habits”  in the child but rather “guide students to independently discover meaning within the subject”. 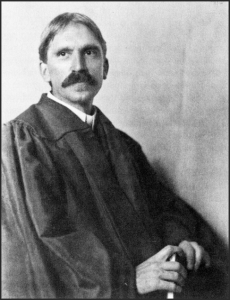 While this may sound positive, in realm of morality, it was in direct opposition to the teaching method that the Bible describes in Isaiah 28:13 is to be done precept upon precept and line upon line.  Furthermore 2 Timothy 3:15-17 states: “… that from childhood you have known the Holy Scriptures, which are able to make you wise for salvation through faith which is in Christ Jesus. All Scripture [is] given by inspiration of God, and [is] profitable for doctrine, for reproof, for correction, for instruction in righteousness, that the man of God may be complete, thoroughly equipped for every good work”.

In fact the Bible warns us of such men as John Dewey in 2 Timothy 4:2-4:4 whose desire is to turn people away from the Word of God. That said, the Dewey method of teaching became the standard of teaching that is still in use in our public schools and many children’s curriculum of today.  Satan got what he wanted out of his pawn Dewey. God and His Word has been erased from the modern education system.

The result of this system has been the matriculation of many generations of Americans who are not even aware that at one time, the precepts of the Bible were the foundational standard of moral law and education in our land. We now have millions who have been raised on the Satanic edict of “Do what thou wilt which is the whole of the law”. This lie can also be read as: do what you want as you are just an evolutionary product of survival of the fittest. Just do it …sound familiar? Not only has our education system moved away from the objective right and wrong of the Bible, our method of law has also strayed into the relativistic truth of case law. As a result, we are directly experiencing the prophetic words of 2 Timothy 3:1-3:4 which tells of the disintegrating society of the last days.

If this teenager and his parents were submitted to the Word of God; how might have this bus incident turned out differently? To begin with, if this boy was submitted to Jesus Christ and the Word of God, this event would have never happened for multiple reasons:

In conclusion, if this teenager was a follower of Jesus Christ (John 3:16, Romans 10:9-10) and lived according to the Fruit of the Spirit (Galatians 5:22-23) rather than the fruits of the flesh (Galatians 5:19), this would have been a nonevent. If per the Will of God this boy does read this article, it is not too late to change your mind and ask Jesus to be your Savior. While you are suffering the consequences of your actions, you can still have victory and peace through Jesus Christ!

While it is easy for news analyst to criticize the driver for not putting the bus into park or for that matter defending himself, it is evident that if Wells who was in the middle of being attacked did not react, the assailant could have seriously injured him. That said, from the video, there was no evidence that Wells used excessive force in subduing the boy. He immediately backed off from the teen when the attack was over.

As a result of this incident, the bus company fired the driver. At the time of this article, Scott Wells union is attempting to see if the driver can recover his job.

While I do not know Scotts spiritual background, if he was a Christian, did he react appropriately in this situation? Well it depends on the intent of his heart.

If he was truly in self-defense mode (which it appears) and in fear of his life, the Bible does show some examples where self-defense was allowed. When Lot and his people were captured, Abram had no problem rescuing him with force (Genesis 14:13-16). The Mosaic Law given in Exodus 22:2-3 says that if a man breaks into a home to steal at night, the home-owner has the right to kill him in defense. In daylight, when the home-owner can see that he is there to steal and not to kill, he cannot kill the thief in defense. It should be noted that Christians who are citizens of any country are subject to the laws of the government jurisdiction where they live (Romans 13:1-2).

In the New Testament in Luke 22:37-39, Jesus advised His disciples to take swords along with their other provisions. Arming oneself would infer the use of those arms for defense. While Jesus scolded Peter for using his sword in the Garden of Gethsemane, the focus of His admonition to Peter was for unwittingly trying to prevent the task that Father God had given His Son Jesus (John 18:10-11).

If however the bus driver acted out of anger or retaliation, the Bible says to not repay evil with evil, but to bless your enemies (Romans 12:14, 17). And in Matthew 5:39, Jesus said if someone slaps your right cheek, offer them your left as well.

In either situation, as God forgave us through belief in His Son Jesus Christ, so we must forgive others. My prayer is that Scott will have forgiveness in his heart towards this boy, his mother, and his company who terminated him and holds no bitterness in his heart from what has happened. I also pray that this youth will turn his life to Christ and hence find God’s purpose and joy in His life. In Jesus Name I pray. Amen!

May God bless you as you seek Him through His Word and Prayer!